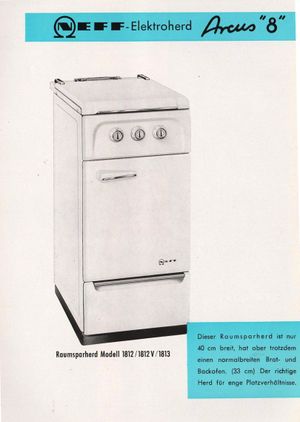 In 1952, Neff succeeded in making a decisive breakthrough on the market for electric cookers with its new Arcus model.[1]

The electric cooker combined cutting-edge design with technical innovation. The front of the cooker was curved in an arc shape – hence the name arcus from Latin – over the rotary knobs.[2] This was the first time a connector pin plate was not used in the construction, but rather stainless steel spill rings from the company E.G.O.[3] Unlike the connector pin plate, the new hotplates formed a cohesive unit with the hob. The stainless steel spill ring prevented overboiling dishes from spilling into the cooker's interior, and hence arduous cleaning of the appliance's innards. The Arcus model optionally featured a warming compartment or crockery trolley.

The electric cooker was a major sales success – more than a quarter of a million had rolled off the production line by 1956.[4] The model was continuously refined. The Arcus "8" was launched on the market in 1959 and offered a host of innovations such as high-speed hotplate, cooking machine and timer for switching the cooker on and off automatically.