"The European market demands companies of a European dimension. The consolidation of the technical and commercial strengths and activities of the mutual consumer goods segments will significantly improve the competitive strength of the merged segments."[1]

Overcoming the crisis together

This quote from the preamble to the contract establishing "Interessengemeinschaft Haushaltsgeräte (IGH)", which was the forerunner to Bosch und Siemens Hausgeräte GmbH (BSHG[2]), succinctly describes how the planned cooperation was good for all sides. The market for electrical home appliances had recorded increases in production and growth rates of up to 290 percent after the economic miracle. From the mid-1960s, every household was equipped with the necessary appliances, sales were stagnating and growth rates declining rapidly.[3] This development was reinforced by a general downturn, which resulted in a minor recession in 1967.[4] In this situation, the benefits of collaboration were obvious: consolidation through cooperation, establishment of common development, shared production and joint sales as well as focus on technical innovations and rationalization.[5] IGH wanted to use its strong new market position to stand up to the competition, which was coming primarily from Italy, the U.S. and Japan.[6]

Back in 1963, a commission made up of Robert Bosch GmbH and Siemens AG gave thought to a collaboration in the field of home appliances.[7] Initial specific negotiations between the two companies took place in 1965 with a preliminary contract being inked in June of that year. A "neutral office" in Munich, which was renamed "Studio ELGE" from August 1965, was to take charge of formulating the definitive contract.[8] "Interessengemeinschaft Hausgeräte (IGH)" was founded on December 22, 1965, made up of the following companies: Siemens Electrogeräte AG (SE) and Constructa-Werke GmbH, both subsidiaries of Siemens as well as the home appliance group of Robert Bosch GmbH, Blaupunkt and Junkers & Co., subsidiaries of Robert Bosch GmbH. The first meeting of shareholders took place on February 5, 1966 in Munich, with IGH addressing the public in a press release in March. IGH was managed by Dr. Helmut Ohr from Robert Bosch GmbH and Dr. Wilhelm Vox from Siemens AG.

Many strong brands under one roof

Criticism of the planned cooperation came from different sides, including the state. The Federal Cartel Office raised concerns about the cooperation in a resolution from March 17, 1966.[9] The contract was thereupon revised and the Cartel Office gave the green light on November 22, 1966. Bosch und Siemens Hausgeräte GmbH (BSHG) was founded by Siemens AG and Robert Bosch GmbH on January 13, 1967.[10] BSHG was run in equal representation by three shareholders from each of the parent companies, Siemens and Bosch.[11] The share capital was one million Deutschmark. The products continued to be distributed under the registered trademarks. In the years that followed, BSHG reorganized its sales and production. Structures were standardized based on the Siemens sites in Berlin (specializing in washing machines) and Traunreut (specializing in cookers, ovens, cooktops) and the Bosch site in Giengen (specializing in dishwashers and refrigeration appliances) and synergies were sought.

Bosch and Siemens announced the stepping up of their collaboration in a joint press release on November 28, 1972. BSHG Manager Wolfgang Tochtermann described the consortium agreement negotiated in his "History of BSH" as the second phase of BSHG's integration.[12] Bosch Hausgeräte, Siemens Electrogeräte GmbH and Constructa GmbH were newly established as operating companies on January 1, 1973. These companies took their instructions from BSHG but remained full subsidiaries of their parent companies. The collaboration with the Robert Bosch GmbH subsidiary Blaupunkt Werke GmbH was secured by BSHG's 25 percent intercompany holding in Blaupunkt. The company Junkers & Co GmbH, likewise a subsidiary of Bosch, was no longer involved. The share capital was increased to 140 million deutschmarks. Functions that had previously been undertaken separately, including financing, auditing, patents and contracting, taxes and insurance, customer service and spare parts supply, warehousing and transportation as well as accounting and market research were converged. The workforce at BSHG expanded to meet the new challenges. At the same time, the company was making efforts to standardize its conditions of employment. Siemens employees of BSHG were formerly remunerated according to Siemens rates and Bosch employees according to Bosch rates. It took until the end of 1977/beginning of 1978 before all of the around 16,000 employees were taken over by BSHG on January 1, 1978 following a renewed transformation of the companies.[13] The staff received uniform conditions of employment. The plant magazine inform, which had been appearing since 1978, promoted a sense of community among the staff. 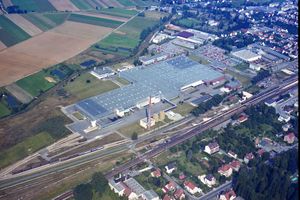 Major changes were also taking place in terms of premises at this time: the new dishwasher plant in Dillingen was inaugurated in 1976 and BSHG acquired its first foreign investment through shares in the Greek market leader Pitsos (now BSH Ikiakes Syskeveses A.B.E.), which was founded originally in 1865. The administration role moved to a new building in Hochstrasse in Munich in 1978. The shared, centrally located administration building laid the cornerstone for BSHG's corporate identity and functioned as a clearly visible external sign of the internal amalgamation.[14]

The second integration phase ended in 1978. The participating companies, that is Robert Bosch Hausgeräte GmbH, Siemens Electrogeräte GmbH and Constructa GmbH, finally merged in Bosch Siemens Hausgeräte GmbH. BSHG acquired full entrepreneurial sovereignty with respect to its parent companies following conclusion of this phase. The joint venture was a success.