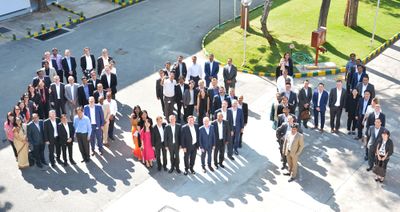 "We are BSH" was the new guiding principle since 2016. "What drives us: We want to be the first choice for consumers worldwide. We are growing responsibly and doing our part to protect our environment and its natural resources."[10] The motivation and ambition described here gave deeper meaning to the strategy and added vision to the strengths and values of the globally operating company.[11] In 2017, the BSH startup WeWash digitalized the laundry room. A combination of software and hardware made washing and drying cycles made smarter and more efficient for users. [12] Since June 2017, consumers have been able to get advice in the brand rooms at the Munich training and conference center in Munich, and also have the opportunity to experience the BSH home appliances in action here in the showrooms. [13] In the fall, BSH Hausgeräte opened two new factories in Poland, at which around two million appliances would be produced. [14] BSH Hausgeräte celebrated four anniversaries in 2017: BSH celebrated its 50th anniversary, as did the vacuum cleaner factory in Bad Neustadt, and the Giengen site celebrated not only the milestone of 80 million cooling appliances produced, but also its 70-year anniversary.[15]

In January 2018, BSH in Giengen commissioned a completely new production line. A barcode scan enabled appliances to be identified right from the first production step for the around 250,000 built-in refrigerators per year. [16] In the summer of 2018, a new logistics building was opened at the Traunreut site. The hall, measuring 9,000 m2 in size, was for the increased demand for finished products made in Germany.[17] A hall extension for around 200,000 appliances at the BSH site in Nauen also celebrated its topping-out ceremony, a new development and administration building for around 230 workplaces was inaugurated at the Traunreut site, and a new logistics building for 40,000 appliances was opened in Dillingen.[18] In the fall of 2018, BSH set another milestone for the connected kitchen with its own Home Connect appearance at IFA, strengthening the importance of the cross-brand connectivity platform. And Kitchen Stories made its first appearance at IFA as the youngest member of the BSH brand family.[19]

On March 1, 2019, Silke Maurer was appointed Chief Operating Officer (COO) of BSH Hausgeräte GmbH. She is responsible for the areas of manufacturing, development and innovation, as well as corporate technology and global supply chain management.[20] On July 1, 2019, Uwe Raschke became the new CEO of BSH Hausgeräte GmbH, while continuing to perform his duties on the Bosch Board of Management. Dr. Karsten Ottenberg left BSH on his own request effective June 30, 2019, and CFO Johannes Närger retired effective June 30, 2019.[21]

In 2019, BSH and Techstars launched the Accelerator program for the “home of the future” in Munich. The startup program focuses on ideas relating to the future home and the smart kitchen.[22]

In the summer of 2020, BSH Hausgeräte GmbH launched virtual brand platforms due to the Covid-19 pandemic. These offer detailed information, lots of moving images, tailor-made solutions, and special PoS offers. [23] Effective July 1, 2020, Dr. Carla Kriwet took over as Chairwoman of the BSH Board of Management. That meant that for the first time in the company’s history, two of the four board members are now women. Kriwet moved to BSH from the health technology company Philips.[24]

In 2020, BSH achieved turnover of 13,9 billion euros. Worldwide, some 60.000 employees, 38 production plants in Europe, the U.S., Latin America and Asia, as well as a strong network of more than 80 sales, production and customer service companies in around 50 countries are the basis for the customer-centric BSH business model. With a share of 3,5 percent for investments in research and development, this remained at a high level – the focus here continued to be on digital technologies.

Since the start of 2021, BSH Hausgeräte GmbH has been working together with the World Food Programme (WFP) of the United Nations to achieve a world without hunger. BSH also works in Germany with the organization JOBLINGE to jointly combat youth unemployment.

In 2020, BSH achieves record turnover of 13.9 billion euros, an increase of 5.3 percent over the previous year, making it the strongest year in its more than 50-year history. Worldwide, around 60,000 employees, 38 production plants in Europe, the U.S., Latin America and Asia, as well as a strong network of more than 80 sales, production and customer service companies in around 50 countries are the basis for the customer-centric BSH business model. With a share of 3.5 percent for investments in research and development, this remains at a high level – the focus here continues to be on digital technologies.

In 2021, BSH focuses its business activities on digitalization and sustainability. In 2021, the pioneer of the connected kitchen, the Home Connect system, is available in 49 countries and 27 languages, with the Home Connect app being downloaded more than two million times since its launch in 2014.[25]

Since the start of 2021, BSH Hausgeräte GmbH has been working together with the World Food Programme (WFP) of the United Nations to achieve a world without hunger. BSH supports the WFP Innovation Accelerator which nurtures start-ups and innovation teams. BSH also works in Germany with the organization JOBLINGE to jointly combat youth unemployment. To reduce its own carbon footprint and help close the plastic cycle, BSH is using Styropor® packaging based on chemically recycled plastic.[26] In addition, BSH starts using recycled steel from Salzgitter Flachstahl GmbH for the first time in September 2021. Using low carbon green steel, initially for mounting brackets in washing machine production in Lodz, is another step on the way to achieving BSH’s ambitious sustainability goals.[27]

In the summer of 2021, BSH helps those affected by the flood disaster, and organizes donations of appliances and money, as well as practical support by customer service.[29]

In 2021, BSH achieved turnover of 15.6 billion euros. Worldwide, some 62.000 employees, 40 production plants in Europe, the U.S., Latin America and Asia, as well as a strong network of about 80 sales, production and customer service companies in around 50 countries are the basis for the consumer-centric BSH business model. At € 755 million (4.9% of turnover), R&D spending in 2021 was at the highest level in the company's history. The focus remains clearly on the digitization of the entire value chain.[30]

Lars Schubert, currently Chief Technology Officer and Member of the Board of Management of BSH in China, will become the new Chief Operating Officer (COO) of BSH Hausgeräte GmbH on April 1, 2022 and be responsible in future for manufacturing, development, innovation, corporate technology and global supply chain management. The graduate engineer is taking over from Dr. Silke Maurer, who is leaving the company at her own request.[31]

In the region Africa, BSH is investing around 30 million euros in a new, state-of-the-art cooker factory in Egypt. It is scheduled to go into operation in 2024. The factory is designed for any annual production capacity of more than 350,000 appliances for consumers in Africa and the Middle East.[32]

Carla Kriwet is leaving BSH at her own request on 30 April 2022 to take on a new role outside the Bosch Group. CFO Gerhard Dambach appointed interim CEO.[33] Dr Matthias Metz, currently a member of the Group Board of Management of the ZEISS Group, will become CEO and Chairman of the Board of Management of BSH on 1 October 2022.[34]