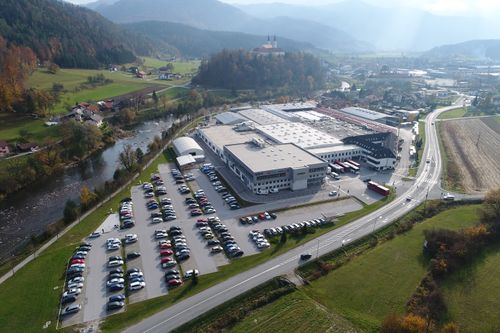 Aerial view of the BSH factory in the picturesque slovenian village of Nazarje (source: BSH Mediapool)

The company BSH[1] Hišni aparati d.o.o. Nazarje in the Upper Savinja Valley in Slovenia has been manufacturing small domestic appliances since 1970 (first under the name MGA and owned by Gorenje). In the beginning 68 workers were employed in the plant, 45 of them were women. Wall-mounted kitchen scales were manufactured. The cooperation with the BSH Group started in 1974, and the result was the start of production of a mixer. In 1978 a considerable step forward was taken in the technological field. A line for the production of electro-motors for coffee grinders and mixers was set up. In that year already 284 workers were employed.

On 21 February 1986 the 10th millionth appliance was produced in MGA. It was an electric hand mixer. In the first quarter of 1990 MGAs production was on a rapid increase, but on 1st of November the Savinja River next to the factory broke its bank and started flooding, made its way inside the factory and caused total devastation. The water destroyed machines, transport lines and swept away finished products and large amounts of reproduction material.

Slovenia gained independence of Yugoslavia in June 1991 and after MGA experienced disintegration in markets of former Yugoslavia. Then a recession in the white goods market in Europe followed, plus uneventful export activities to the USA, talks with BSHG about entering into ownership started and continued. On 1 March 1993 BSHG became 100% owner of the company Gorenje MGA. In 1995 new business facilities of 720 square meters were constructed. The new premises were to serve the R&D department, laboratories and an exhibition area. In 1998 1,9 million appliances were manufactured in Nazarje as well as 387.000 electro-motors. The total turnover value was 120 million German marks and 95% of production was exported. The company employed 546 workers.

In April 2001 BSH Hišni aparati d.o.o. Nazarje also started the marketing of major domestic appliances under brands Bosch and Siemens in the domestic market, as well as the markets of former Yugoslavia. 2007 a new factory hall was build, where at the beginning of 2008 the production commenced and by the end of February 2008 more than 30.000 Tassimo appliances were manufactured there. Mid of 2008 the production of the new EQ.7 fully automatic coffee machine started, and by the end of the year 19.000 EQ.7 were produced. Additional 300 workers were employed due to production expansion.

The Company BSH Hišni aparati d. o. o. Nazarje is also responsible for sales and marketing activities for the whole Adriatic East region. In the past years, over 7 million appliances were produced in Nazarje each year, and the company has over 1300 employees.