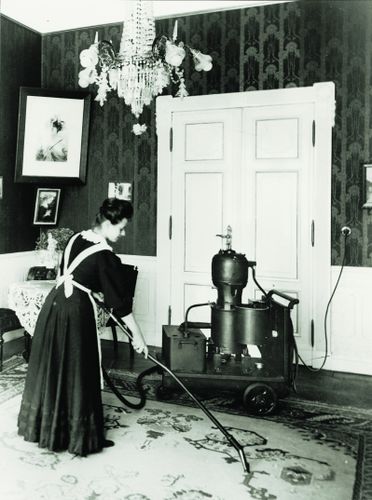 Vacuum cleaners have a tradition stretching back over 111 years at BSH. In 1906, Siemens launched its first vacuum cleaner on the market with the so-called dedusting pump. This appliance was developed on the basis of the Siemens Elmo vacuum pump. It weighed 150 kg, had an upstream filter and was mounted on a movable sled.

At around the same time, similar appliances were being developed in England and America. These early “mobile dedusting systems” were generally not used in private households as their dimensions, maintenance and operation rendered them unsuitable. They were very expensive and sometimes even had to be transported from one floor to another using special elevators. They were used mainly in hotels, restaurants, clubs and institutions.

Large, wealthy households were the first to buy the new dedusting pumps. The appliances were operated by domestic staff. Interestingly, housemaids were initially horrified by the new machines, which were actually intended to make their lives easier. They were afraid of the new technology and were worried that they would soon be rendered superfluous.

In the decades that followed, Siemens vacuum cleaners became quieter and less terrifying, and enjoyed huge success in private households.