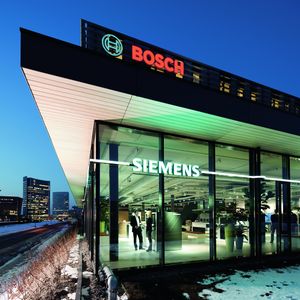 Bosch and Siemens in the Netherlands

The Netherlands is home to the oldest representative offices of the parent companies of BSH[1], Bosch and Siemens outside of Germany. Siemens & Halske was represented in The Hague by the company Wisse, Piccaluga & Co. as far back in 1879.[2] The company Willem van Rijn then took over as sole representative of Bosch products in the Netherlands on March 15, 1903 following a personal meeting between the two company founders.[3]

The representative offices, which were also active in the home appliance sector, remained separate companies for an extended period of time.  The sale of Bosch home appliances ran successfully under Willem van Rijn for many years, with Neff also coming on board in 1982. The subsidiary Willem van Rijn Huishoud-elektro B.V. was founded for the sector in 1986.

The Siemens and Gaggenau brands were distributed by Siemens NV. The former Chairman of the Board of Management of Bosch, Dr. Kurt-Ludwig Gutberlet, wrote about the partnership with the Dutch representations in a letter of congratulations in 2003: "The success story (...) in the Netherlands could not have been written had we not always been able to count on you (...)."[4]

BSH – united under one roof

In a move to merge the representative offices abroad in one company, a joint venture between Willem van Rijn, BSH Huishoud-Elektro B.V. and the Consumer Products Department of Siemens Netherlands was concluded in January 2009.  From this time on, the Bosch, Siemens, Gaggenau, Neff and Constructa brands were distributed by the new Dutch BSH subsidiary, BSH-Huishoudapparaten,

with sales overall in the Netherlands controlled directly by BSH. Preserving the continuity of the business relationships with retail customers and end consumers was the primary reason put forward for the merger.[5]

A new building was planned in Amsterdam Hoofddorp to signal this convergence to employees and colleagues but also to the outside world. The intention was to combine the five different brands here under one roof.

A time capsule was embedded in the foundation of the building when the cornerstone was laid on April 29, 2010. As a reminder of the shared history and merging of the two companies, the capsule among other items contained a drawing of Robert Bosch from 1939 on the occasion of the opening of the then Willem van Rijn headquarters and signed with the Bosch slogan "I would rather lose money than trust." Also included was a photo of Werner von Siemens and the purchase agreement for the Siemens office in 1921 in The Hague.[6]

BSH Huishoudapparaten B.V. acquired the new headquarters in the Park 20I20 office park in Hoofddorp near Amsterdam on November 11, 2011. As with the entire surrounding office park, the Cradle to Cradle®-inspired building was designed by American architect William McDonough and constructed from 100 percent recyclable materials. It used solar and wind energy, and had a water treatment plant as well as advanced cold and heat storage.[7] In addition to the offices, every BSH brand was presented here in its own showroom – collectively creating the inspiratiehuis 20|20. The headquarters thus embodied the values of the Group to the benefit of employees and customers. The inspiratiehuis welcomed its 100,000th visitor on November 30, 2015.