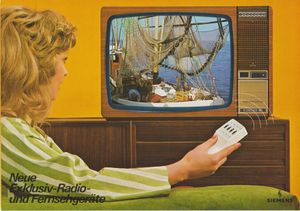 The first German remote control was launched on the market in 1956. The “Zauberschalter” (magic switch) from Tonfunk was used to switch the accompanying radio on and off remotely. Just how special this technical innovation was for users at the time is clear even from the name. Users in the U.S. adopted a somewhat different slant, however. “Space Commander” or also “Lazy Bones” were the names of the first remote controls for televisions produced there. The name was particularly telling in the case of the “Space Commander” remote control. To activate the TV, a light beam had to be directed at a sensor on the TV. The only problem was that any light beam would activate the sensor, including direct sunlight, for example.

The the remote control began its ascendancy in Germany with the introduction of the color television in 1967. Because these were high-tech devices, many of the new color televisions already came with a remote control. The devices had a button for every TV station, for example, there were six buttons on the Siemens Bildmeister FC 260 Color, which meant that six channels could be programmed. The choice of programs could be extended by an additional four with the FZ 4155 remote control, which could be ordered as a special accessory.[1] Together with the buttons on the TV set, up to ten stations could therefore be controlled. This was perfectly adequate in Germany at the time since the TV landscape in those years was characterized by ARD, ZDF and a handful of regional broadcasters. Private television channels were still banned in Germany up until 1984. 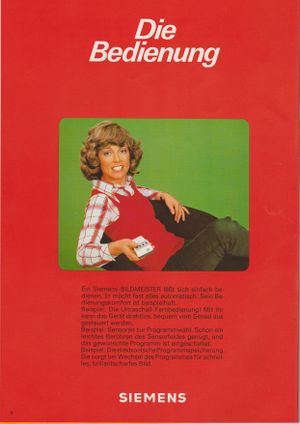 The 1980s saw a shift toward infrared technology. With its SFH506-xx series of electronic components, which were offered for frequencies of 30, 33, 36, 38, 40 or 56 kHz, Siemens became the largest provider of infrared devices on the European market.[3] New receivers like cassette recorders were developed, hand in hand with new features, such as teletext.

PKS (now Sat.1) and RTL were the first private broadcasters to go live in January 1984. The subsequent surge in the number of television programs increased the demand for program selection options. Remote controls became more complex and were to control more and more entertainment and communication electronic devices. 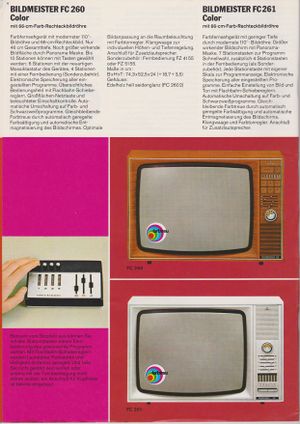