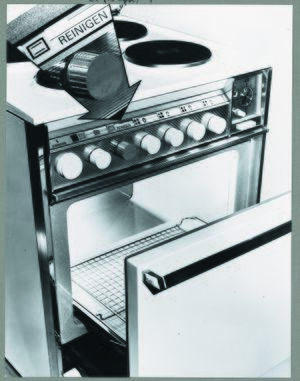 A Siemens stove with pyrolysis from 1972. (Source: Siemens Corporate Archives)

Siemens Elektrogeräte GmbH obtained a patent on May 30, 1973 for an "Electric cooking oven with pyrolytic self-cleaning" invented by Josef Ackermann.[1] A comparable technology had existed in the U.S. for around ten years, with General Electric selling self-cleaning ovens that operated according to the principle of pyrolysis from 1963. However, the innovation was introduced in Germany by Siemens and Neff at the beginning of the 1970s.[2]

The chemical process of pyrolysis has been known to people ever since the Stone Age. The process refers to the thermo-chemical breakdown of organic compounds at high temperatures without the addition of oxygen. Pyrolysis is used, for example, to extract tar from wood. The substances carbonize fully at very high temperatures, in other words, turn into carbon dust. This process can also be used for self-cleaning of ovens. The engineers at the cooker factory in Traunreut developed an oven for this purpose that could heat up to more than 500 degrees Celsius.[3] The oven needed a few hours for this cleaning process. "The automatic operating principle of the pyrolytic self-cleaning is based on three stages: The oven is first heated to 290°C for an hour (to dry out the food waste), the temperature is then increased to 500°C and residues burned for two hours with the large-surface grill acting as an afterburner, and, thirdly, the temperature is reduced.[4] In the meantime, the oven is heated to 465°C and, after two hours, then cooled for an hour. All contaminants are carbonized as the oven is heated, in other words, turned into ashes that can be removed with ease from the cooker. This dispenses with the need for complicated mechanical cleaning of those hard-to-reach areas in the oven and for users to resort to aggressive cleaning agents.

The main disadvantage of self-cleaning is its high energy consumption, which has been successfully reduced thanks to ongoing enhancements such as double door seals, reflective interior panes, doors with four panes, new electronic control and reduction in the pyrolysis temperature to 465°C.

BSH[5] still produces cookers with pyrolysis today. For example, Bosch advertised its Series 8 compact ovens as "no cleaning effort thanks to automatic self cleaning."[6]