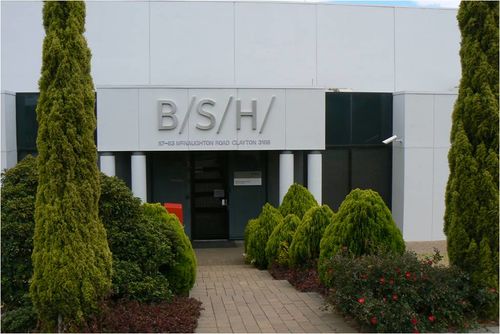 2004 to 2008: Entrance to BSH Home Appliances Pty. Ltd. housed in Clayton, a suburb of Melbourne. In 2017, the company moved to the nearby grounds of the parent company Bosch. (Quelle: BSH Mediapool)

In 1978, BSH[1] sent off a container filled with dishwashers from the Dillingen plant on its long journey to the other side of the world. The first container load of its kind, it reached its destination in Australia safe and sound.[2] This anecdote shows how the Bosch and Siemens Hausgeräte brands were already being exported to Australia and New Zealand in the early decades after BSH was founded.

The white goods of both BSH brands have since become established names in the region. Bosch dishwashers won an Australian energy-saving award in 1989. At the time, they were the only dishwashers on the Australian market to receive five (out of six possible) stars.[3] The entry into the Chinese market in 1994 paved the way for further development in the Asia-Pacific region. This development was coordinated from Singapore.[4] In 2004, two BSH subsidiaries were founded in Australia and New Zealand. [5] BSH Home Appliances Pty Ltd. is based in Clayton, Victoria. BSH Home Appliances Ltd. in Auckland is responsible for sales in New Zealand.

There is fierce competition in the Australian home appliance market.[6] Nevertheless, BSH managed to triple its revenue between 2005 and 2015. One of the contributing factors to this success was the continuous improvement of the service offered by the Australian BSH subsidiary. In 2015, the “Follow the Sun” service project was established. This project provided 24/7 access, five days a week, to customer service in Australia. The moment the call center in Melbourne closes (6:00 p.m. local time, 3:00 p.m. on the west coast), colleagues in the UK take over the call center service. In turn, the BSH service employees in Australia support their colleagues in the UK when they are overloaded – primarily online. The number of service requests submitted via social media is on the increase.[7]