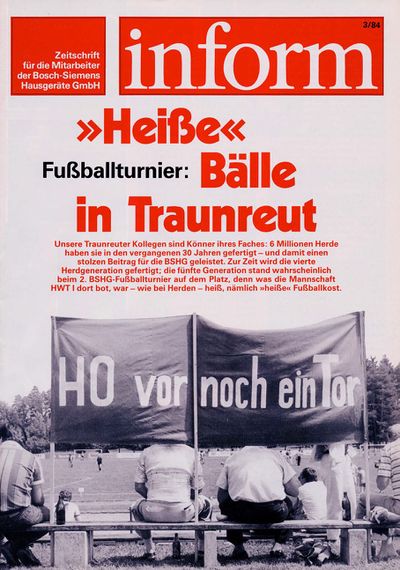 The BSH football tournament on the title page of inform in 1984. (Source: BSH Corporate Archives)

The annual BSH[1] football tournament has established itself as a sporting and social tradition over many years. Employees from the different BSH locations have been pitting themselves against each other in football since 1982, in line with the words of former coach of the German football team Sepp Herberger "The round thing has to go into the square thing". While initially it was just teams from the German locations, now teams from abroad also participate, reflecting the international nature of BSH.

This is the other side of the tournament. Apart from the sport, it's also about promoting personal contact between employees. The event is therefore always rounded off by a colorful evening, where the employees can enjoy good food and great entertainment.

At the first tournament in 1983, the home appliances plant in Dillingen invited teams from the factories in Berlin, Giengen, Traunreut and from headquarters in Munich. The football players from Traunreut were the first to be crowned champions – and this didn't change until the third tournament in Berlin.

Teams from Bretten (Neff) then joined in subsequently.

Football on an international scale

Then it was the turn of Zaragoza in the Spanish province of Aragon in 1995; BySE, a member of the BSH Group in Spain, had a location here. The tournament was staged at the grounds of Real Zaragoza, the winner of the European Cup Winners' Cup in 1995 – a tremendous honor for BSH. 20 teams took part this time.

Aside from the tournament, there was time for tours of the plant, sightseeing in the city, folklore performances and general international good will. The tournament also helped to promote and strengthen the employees' identification with the company.

In 1997, the tournament was staged in the Brandenburg town of Nauen. The newly established BSH location in the new federal states (former German Democratic Republic) was chosen because employees at the plant had their own football team and the plant had its own football field.

More teams took part in the BSH tournament in Istanbul in 1998 than at the Football World Cup in France the same year. The tournament took place at the training grounds of Galatasaray in Istanbul where German football player Lukas Podolski is playing in 2016/2017. The participants also enjoyed a tour of Istanbul including a trip to the Bosphorus and a visit to the Sultan Ahmed Mosque as well as the BSH plant in Cerkezköy.

Due to cost-cutting measures, only a small self-organized tournament took place in 1999 in Munich.

No tournament was likewise held in 2000. After that the tournament was reorganized and professionalized owing to the large number of teams. The European locations were split into five groups: Germany North and South, as well as Spain, Turkey and Greece. The respective group winners from 2001 met in a BSH European Championship one year later in the commune of Lipsheim in Alsace.[2]