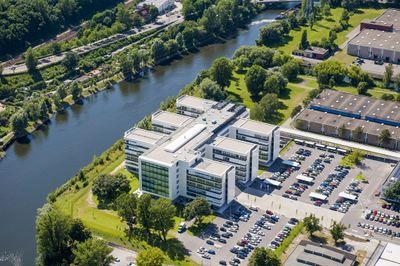 The history of the Berlin site is closely linked with the history of the Siemens parent company. The "Telegraphen-Bauanstalt von Siemens & Halske" company was founded in Berlin-Schöneberg in 1847.[1] In 1887, it moved to Spandau, which became a district of Berlin in 1920, to accommodate an expansion of the plant.[2] Siemens not only built new production buildings, but also housing for the workers, a railway line and supply facilities. In 1914, this complex was given the name "Siemensstadt". From 1925, electrical home appliances were also mass produced here. After 1945, key production areas were relocated to West Germany. By 1953, however, home appliances were already being produced again in Berlin.[3]

Siemens integrated the Berlin home appliance plant into BSH[4] in 1967. As part of standardizing the production and sales structures at BSH, the product range was streamlined and efforts were made to achieve synergy effects with other plants.[5] Siemens therefore passed on refrigeration appliance production in Berlin to Bosch in Giengen and concentrated instead on manufacturing washing machines, production of which, in turn, was discontinued in Giengen.[6] The washing machine plant in Berlin made a significant contribution to the success of BSH. In the 1980s, the Berlin plant had more than 3,000 employees. The broad production range covered front and top loaders, as well as washer-dryers and dryers. After the fall of the Berlin wall, the general conditions at the Berlin production site changed significantly. Production in Berlin was ultimately no longer economically viable and was discontinued in 2012. At the same time, as of 2011, Berlin changed from a production to a development location. The production of high-quality washing machines continued just 40 kilometers away, at the Nauen plant opened in 1994.

Around 900 BSH employees now work in Berlin at the Technology Center Laundry opened in 2011.[7] The task here is to develop the most efficient and sustainable washing machines, dryers and washer-dryers possible for the international market. With three acoustics labs and a virtual reality lab, the high-tech site creates the best conditions for product development. In addition, the site is also home to areas such as project management, quality management, industrial engineering, information technology and the supply chain. A conscious decision in favor of ecological construction was already made in the design of the technology center. Environmental protection is also very important in daily operations. For example, the heat from the 1,000 or so washing machines and dryers that are sometimes tested here around the clock is used in winter to heat the building. That's exactly how the newly developed products should contribute to resource conservation in the home. Thanks to new technologies, energy savings of more than 60 percent are achieved compared to similar appliances at the turn of the millennium.[8] To remain a leading innovator, the technology center has been cooperating intensively with Berlin universities since it was founded.

The technology center makes BSH an attractive employer in the Berlin/Brandenburg region. On 40,800 square meters, around 950 predominantly highly qualified employees from 26 different nations are employed here.[9]

Innovations and world novelties from Berlin