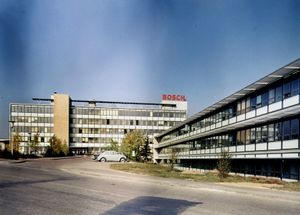 The Giengen site, BSH's[1] oldest production location, has been in existence since 1944. Founded by the then Bosch subsidiary Sundgau Maschinenbau GmbH, cooling appliances have been produced in Giengen since 1949.[2] Just 14 refrigerators were produced in the first year of production – a good ten years later and already the two millionth refrigerator was rolling off the production lines.[3] Freezers were added to the portfolio in 1960, with washing machines also being produced at this stage.

Following the founding of BSH in 1967, the production and sales structures were adjusted and harmonized.[4] Bosch consequently passed over production of washing machines to Siemens in Berlin and concentrated instead on producing cooling appliances, which in turn ceased being produced at Siemens.[5]

BSH Hausgeräte GmbH developed the Giengen site into a high-tech location where refrigerators, freezers and fridge-freezers were produced. A competence center was also established alongside the factory, dedicated to researching and developing the appliances.[6]

Pioneer in the area of sustainability 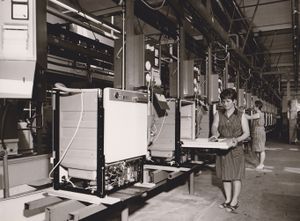 Giengen became a pioneer in the area of sustainability thanks to its extensive research – only CFC-free cooling appliances were produced here from 1993. One year later the plant also successfully eliminated HFCs from the cooling circuit with most cooling appliances. This meant that some 80 percent of all refrigeration appliances produced in Giengen were CFC and HFC-free.[7] "We are particularly committed to protecting and preserving a life-sustaining environment and constantly strive to find environmentally-friendly solutions," wrote Kurt Reitz from the Department for Environmental Protection and Occupational Health and Safety in 1996.[8] Energy-efficient appliances have remained the specialty of the factory in Giengen to this day. The modern cooling appliances consume some 73 percent less energy compared with appliances at the turn of the millennium. 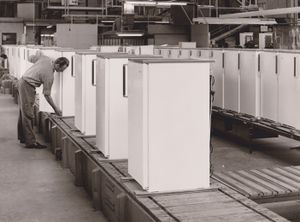 Production of refrigerators in Giengen in the 1970s. (Source: BSH Corporate Archives)

In addition to the factory and research center, the Giengen logistics center is a significant hub in BSH's global logistics network. Goods are stored here in an area the size of more than 20 football fields (144,000 sq. meters). 21,000 large appliances and 200,000 small appliances leave the logistics center every day.

There are eight assembly lines in Giengen producing around 1.6 million refrigerators and freezers every year. The plant with its connected logistics center is one of the largest employers in the region at present. The factory has a workforce of around 2,900 employees. Some 50 apprentices and 20 students are trained or complete combined vocational training and degree programs at this site.[9]

Milestones and innovations from Giengen