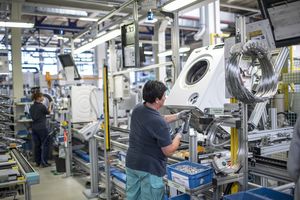 Planning commenced in 1991 for a new dryer series, which would be presented four years later at the home appliance trade fair Domotechnica. In addition, plans were being made for a new top-loader washing machine series.

BSH[1] decided against expanding the parent factory in Berlin for the new products and instead opted to construct a completely new factory. Sites in Brandenburg, Saxony and the Czech Republic were considered. The final decision was made in favor of Brandenburg for a number of reasons including the existing infrastructure, the proximity to Berlin, the favorable geographical location for international shipment as well as the State subsidies that ran into the millions. The following year in 1992, approval was granted by the shareholder delegation, planning commenced, the building application was submitted and an industrial site purchased in Nauen.[2]  The aim was to produce washing machines for the international market. The building was finally constructed and the first pre-series production left the assembly lines in August 1994. Series production of dryers commenced in March 1995.

The Board of Management stated: "With the new extractor hood factory in Bretten in Baden and a new dryer factory in Nauen/Brandenburg, we have succeeded in establishing two state-of-the-art, streamlined factories with attractive cost structures."[3] Series production of top-loader washing machines followed in 1995.[4] Around 400,000 appliances were produced this year by the some 400 employees, with two parallel assembly lines ensuring flexible production.[5] 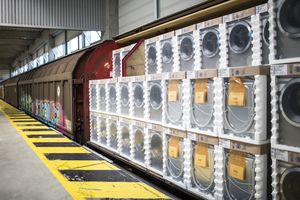 The then head of the factory in Nauen, Udo Barthel, came to an initial conclusion in 1995: "The general impression after the first year of producing dryers in Nauen is very positive, since we have succeeded in ensuring a smooth production start-up. We had already achieved productivity values by September that we had only anticipated for 1996. The work rate and eagerness of all employees is unique and virtually unsurpassable.[6]

This eagerness can also be seen in the design of the area around the newly constructed factory. 60 volunteers distributed the excavated earth masses, at least 56,000 cbm, on a Saturday in May 1996 and landscaped the area with 4,000 fast growing plants. Because more volunteers showed up than anticipated by those who had initiated the plan, the work was already completed by the time they were ready to sit down to lunch together.[7]

One of the largest employers in the region

Around 75 percent of the washing machines produced in Nauen were exported internationally.[8] BSH subsidiary Hausgeräte Nauen Service GmbH was awarded the German Logistics Prize in 1997 for its logistics services.[9]

The dryer division was moved to Lodz in Poland in 2006 – 230 jobs were lost in Nauen.[10] Series production of new front-loader premium washing machines began in Nauen in the same year. The factory in Nauen was one of the top performers in terms of key environmental figures within the BSH Group. The site was named "Factory of the Year" in the "outstanding resource efficiency" category in 2009.[11] This was followed in 2010 with the distinction of "Factory of the Year" in the "Global Excellence in Operations" category. Production of the new premium washing machine series with wave-shaped drum structure commenced in 2014[12], with around 600,000 washing machines being produced here annually. That's more than 16 million appliances since production commenced. BSH in Nauen is today one of the largest employers in the region with a workforce of around 600 employees. Some 40 percent of the workforce are women. The average number of young people undergoing training at the site is 18.[13]

Milestones and Innovations from Nauen