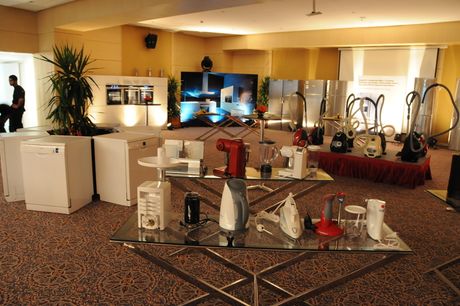 Opening of the Moroccan sales company BSH Electroménagers S. A. in Casablanca in 2008 (source: BSH Mediapool).

The BSH[1] is also represented in Africa. The company has subsidiaries in South Africa and Morocco, which are responsible for the local sales organizations.[2]

In 1996, BSH established a subsidiary in the South African city of Johannesburg, Gaggenau Southern Africa Ltd.[3] One year later, BSH Home Appliances Ltd. was officially founded in the megacity. South Africa is the biggest individual market in the southern half of the continent and therefore the base for expansion into other African markets.[4] BSH distributes the Bosch, Siemens, Balay and Gaggenau brands in South Africa. Branches in Cape Town and Durban followed later. In 2001, around 55,000 large appliances were sold in South Africa, with sales totaling around 24 million euros. By 2002, BSH Home Appliances employed 51 people in South Africa, working in sales, marketing, logistics and customer service. Since 2002, the company has been training its own technicians in a two-stage training course at the BSH Academy for Home Appliances (practice) and the state-run Germistion Technical College Johannesburg (theory) in a pilot project in South Africa. In the first year there were 150 applicants and 15 technicians were trained.[5]

Since 2008, BSH has been represented in North Africa as well as in the south of the continent.

BSH Electroménagers S. A. in Morocco

The Moroccan sales company BSH Electroménagers S. A. was founded in Casablanca in 2008. BSH Electroménagers S. A. distributes the Bosch and Siemens brands.[6] The establishment of the subsidiary is not the first time that the company has entered the Moroccan market, as Bosch household appliances had previously been imported by the North African kingdom. By establishing a separate sales company, BSH strengthened its presence in Morocco.[7]