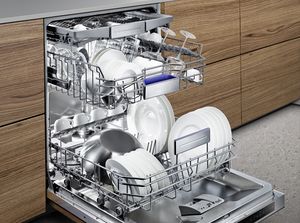 What do an energy-efficient dishwasher and a self-cooling beer keg have in common? At first glance, very little of course. But a closer look at the inner workings of both inventions reveals a fascinating material: Zeolite.

Zeolite is a mineral that occurs naturally in volcanic rock and is produced synthetically for technical use. It has very special properties that developers at BSH took advantage of. "Zeolite is especially suitable for this purpose because it has a crystal structure with a very high inner surface and a large number of channels. 1 kg of Zeolite covers the same surface area as 140 soccer fields! Its water absorbency is thus extremely high," explained Kai Paintner, Group Leader for Advance Development at BSH[1] in Dillingen, who was responsible for the process development referred to as the "sorption process".[2]

In collaboration with the Center for Applied Energy Research e.V. (ZAE), the dishwasher plant in Dillingen developed the then most energy-efficient dishwasher in the world in 2008 with the aid of Zeolite. The partners received the Bavarian Energy Award and the German Innovation Award for Climate and Environment for their development in 2009.

How does Zeolite drying work in dishwashers?

This releases energy in the form of heat. The warm air then flows back into the dishwasher interior, further accelerating the drying of the dishes and thus shortening the dishwasher program. The water remains in the zeolites at the end of the program. The dishwasher reuses the saved water again in the next wash cycle: the Zeolite granulates are heated and discharge the water as moist air into the initially cold rinsing process by condensing it. This allows the Zeolite granulates to be regenerated and absorb water again in the drying phase.[3]

It takes a lot less energy to heat the Zeolite granulates than the dishes in the dishwasher. This saving is measurable:  up to 0.2 kWh per wash cycle or up to 20 percent less energy.[4]

If all conventional dishwashers in Germany were replaced by Zeolite appliances, then the atmosphere would be some 1.2 million tons of CO2 better off each year. This corresponds to the emissions from around 600,000 cars covering 15,000 kilometers annually.[5]

This made the new BSH dishwashers with Zeolite technology the most energy-efficient in the world at that time. The innovation was honored twice in 2009, firstly with the Bavarian Energy Award and secondly with the German Innovation Award for Climate and Environment from the Federal Ministry for the Environment, Nature Conservation, Construction and Reactor Safety and the Federation of German Industries.[6]

Zeolite drying is maintenance-free and endures for the lifetime of an appliance. The technology also offers further advantages: When the door is opened at the end of the program, there is no cloud of steam and the tableware is warm to the touch so there's no longer any danger of burning fingers when unloading dishes.[7]