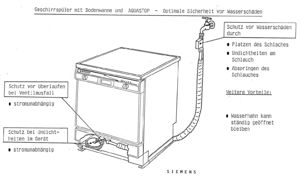 In the 1970s, virtually every household in Germany had a washing machine, and many kitchens also contained a dishwasher. At the same time, there was also an increase in water damage caused by washing machines and dishwashers.[1] The operating instructions were clearly formulated and also legally unambiguous: Washing machines and dishwashers were only allowed to be operated under supervision. What's more, the faucet had to be turned off once the washing or dishwashing cycle was finished.[2] Many users did not observe this particular instruction in practice, with the faucet often being difficult to even reach in the base cabinet. When water damage occurred, it was frequently difficult to ascertain whether it was caused by a faulty appliance or negligence on the part of the user. BSH[3] was very concerned about the growing level of damage caused by home appliances. It was even sued by insurance companies in some cases of damage.

The proverbial straw that broke the camel's back was a claim by a director of a ball bearing factory in Schweinfurt, whose BSH dishwasher sprung a leak and damaged the finest carpets.[4]

By the way, most of the information in this article comes from former BSH employee Ernst Stickel. The BSH Wiki Team interviewed him about his time as a design engineer at BSH.

First development step – the base tray

Developers at BSH looked for new solutions to the problem. An initial milestone was reached in 1979 with the development of a base tray with safety system to protect against leaks. A safety valve closed the water inlet in the appliance, for example, if too much water collected in the inner container or if a float gage in the appliance's newly integrated base tray reported water.[5] The supply hose and faucet still posed problems, however, as they were still unsecured.

The engineers at BSH developed the automatic faucet system, WASA for short, in response. The water supply hose was sheathed by a second hose in this case, which was used to redirect the water to the base tray in the event of a leak.[6] The float gage emitted a signal by means of an electrical switch to the inlet valve, which was connected directly to the faucet and closed the water intake.[7] As a result, no more water came from the faucet and further supply of water was shut off immediately. The float gage also activated the lye pump.[8] The risk that the inner hose would explode was thus already reduced significantly.[9] All protection functions were independent of the power source and thus operated even if the machine was switched off, since the inlet valve was connected to the faucet without delivery of current.[10]

The system was tested by TUV and test institutes on behalf of the insurance industry and found to be safe for use.[11] WASA was registered with the patent office in 1980, with BSH receiving the patent two years later.[12] 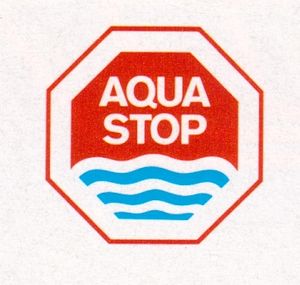 The boss puts his foot down

It was another three years before the innovation was launched on the market in 1985 and integrated in the BSH appliances – first in the dishwashers and then later also in the washing machines.[13] This was because of critical voices within BSH. The feeling in many departments was initially that the technology was too expensive or would create the impression among customers that the BSH appliances were faulty. Finally, the then CEO Helmut Plettner put WASA to the top of the list of priorities. The newly developed automatic system was now also given an international name: AquaStop. A somewhat more cautious approach was taken to begin with, and only some of the machines were fitted with the new technology. But it quickly transpired that there was great demand for the new technology.

AquaStop was so secure that BSH publicly committed in 1987: "Should AquaStop break down contrary to expectations, the Bosch, Siemens and Constructa brands will assume liability for any losses incurred."[14] And this guarantee applied for the entire service life of the appliance.

Other manufacturers attempted to challenge BSH's AquaStop patent. Agreement was reached on a manufacturing license on payment of licensing fees, making AquaStop a complete success from this financial perspective too.[15]

Even today, AquaStop has not lost any of its significance in terms of protecting against water damage – following its market launch the system quickly became an industry standard for dishwashers, washing machines and more recently also fully automatic coffee machines and continuous flow heaters.