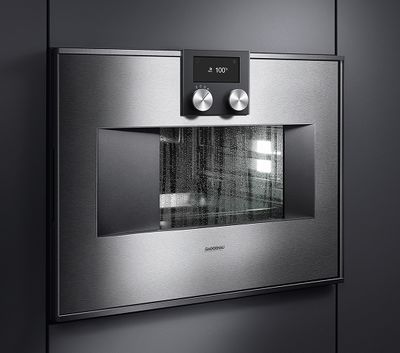 Gaggenau is regarded today as a trailblazer for gentle and pressureless steam cooking in private households. Yves Lebrun, Development Manager at Gaggenau, sums it up: "We were the first to bring combi-steam ovens into the private kitchen and thus allow customers to work like professionals."[1]

Combi-steam ovens for the home

The development department at Gaggenau collaborated closely with professional chefs including three-star chef Marc Haeberlin.[2] This collaboration culminated in 1999 in the first Gaggenau combi-steam oven to be launched on the market for private households.[3] The technology, which had long since been commonplace in professional kitchens, allowed food to be prepared in an especially gentle way. The steam was generated without pressure in the steaming chamber and could be combined individually with hot air in different moisture levels, thus preserving the vitamins, consistency and color of the foodstuffs. Appliances in the combi-steam ovens 400 series had a direct inlet and outlet water connection, making these appliances safe, hygienic and convenient to use.[4]

In 2007, the Gaggenau combi-steam ovens were fitted with a full-surface door with integrated display. The multiply-glazed door, which was optionally fitted with high-quality stainless steel or aluminum, could be opened to the side at full height. The control panel familiar from other appliances was replaced by an integrated LCD display.[5]

The new 200 oven and combi-steam oven series was also launched at the same time. The guiding principle when it came to the design of the 200 series was "less is more". The appliance series was ingeniously designed – right down to the last detail – and reduced to the essentials.[6] While the 400 oven series impressed with its sculptural room impact, the 200 oven series left its mark thanks to its understated look and straight lines. The 400 series appliances were installed with a slight overhang while the 200 series appliances were perfectly flush-mounted. A new control concept for all products ensured simple and intuitive handling of the appliances.

Gaggenau's leading role in this sector was underscored by a host of additional innovations including an integrated grill function (2010), a new design and automatic door opener (2013) as well as the world's first fully automatic cleaning system (2015).

The Gaggenau 200 and 400 combi-steam oven series were produced in the industrial manufactory in Lipsheim, where craftsmanship and cutting-edge industrial technologies blended together in perfect harmony.[7]