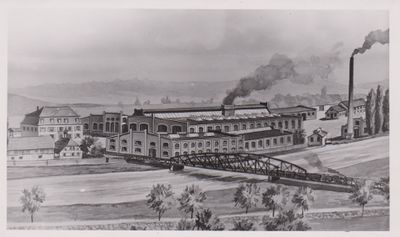 Gaggenau Hausgeräte GmbH produces high-quality kitchen appliances with uncompromising standards of quality, authenticity and design. The range includes ovens, combi-steam ovens, Vario special cooking appliances, glass ceramic, gas and induction cooktops, ventilation, vacuuming and warming drawers, cooling appliances, wine climate cabinets, fully automatic espresso machines, dishwashers, microwaves, tumble dryers and washing machines. The Gaggenau brand presents itself today as a luxury brand and is represented by flagship showrooms in leading cities in more than 50 countries around the globe. The company can look back on a long history. It all began in 1683 when Margrave Ludwig Wilhelm of Baden founded an ironworks to make nails and other household goods. He wanted to boost the economy of the local region and open up new sources of income for its people in addition to agriculture.[1]

Ahead of its time

The smithy had a number of tenants in the intervening years of the 18th and 19th centuries. In 1873, the plant was purchased by the entrepreneur Michael Flürscheim from Frankfurt together with Franz Korwan and named "Korwan und Flürscheim Eisenwerke Gaggenau bei Rastatt". However, Korwan left the business again that same year for health reasons. The company was renamed "Michael Flürscheim Eisenwerke Gaggenau".[2] During his time as director, Flürscheim developed the plant to become the first major industrial undertaking in the region, producing a wide range of ironware such as agricultural equipment and tools. Flürscheim established social institutions in his company which were ahead of their time, including a health insurance fund for workers and their families and a consumer association that allowed employees to buy everyday goods cheaply.[3] The fate of Gaggenau was sealed when Michael Flürscheim came in contact with cooker manufacturer Theodor Bergmann at the Berlin Trade Fair in 1879. Flürscheim was so impressed by Bergmann's eloquence at the stand that he convinced him to come on board with him in Gaggenau.

From chocolate to enamel

Bergmann joined the company in 1880. He became a partner in 1884 and the company was renamed "Eisenwerke Gaggenau, Flürscheim und Bergmann". The company's core activities at this stage were heavily focused on the iron foundry, smithy and enameling plant.[4] Bergmann's friendship with the Cologne-based chocolate manufacturer Ludwig Stollwerck proved pivotal at this time. Gaggenau received an order from Stollwerck to produce chocolate and sweet vending machines. Always striving to produce all components internally if possible, the ironworks also produced the enamel signs for the machines. This gave rise to a completely new product sector. Not only did enamel signs for brands such as Stollwerck, Maggi and Odol become a trademark of Gaggenau, the experience with enamel also led to the development of a robust oven enamel.[5] The recipe for this special enamel formed the basis for the success of its coal and gas stoves. 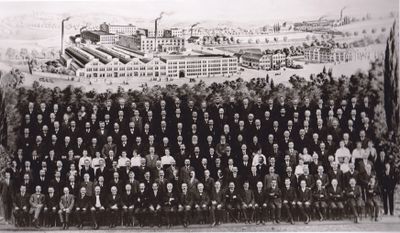 The product portfolio was reduced dramatically at the turn of the century. The plant focused on products such as bicycles – more than 250,000 of the popular "Badenia" bicycles were sold between 1880 and 1908[6] – as well as coal and gas-fired stoves. During the First World War, production was switched fully to war materials. Business began to recover again initially following the war. But inflation and an economic crisis at the end of the 1920s ultimately led to the closure of the plant.

The company was reestablished in 1931[7] and taken over by Otto von Blanquet. In the following years, Gaggenau developed the first electric cooker, representing another important step on the path toward becoming a cooker and oven specialist. After a bomb attack destroyed large parts of the plant facilities on September 10, 1944, work began again initially on rebuilding the factory in the post-war years. It was onward and upward from there, with the company expanding and modernizing its product offering in the course of the currency reform in 1948 and the subsequent "economic miracle". Dr. von Blanquet continued to develop ovens – though of a different type. The revised design consumed less coal and gas ("coal and gas-saving stoves"), gaining the company the reputation of an economic alternative. With the growing popularity of the electric oven, the electric variants of the economical ovens as well as the electrical heating and ventilation systems also gained ground increasingly. Gaggenau appliances thus found their way into many new kitchens in the rebuilt Europe.

For the love of cooking

Otto's son Georg von Blanquet took over at the helm of Gaggenau from 1956. Inspired by a passion for cooking, he had a vision of a custom-designed fitted kitchen with technically sophisticated and easy to use appliances. He relentlessly pursued his vision despite all the difficulties. Georg von Blanquet took advantage of the booming culinary culture at the time and the new esteem in which kitchen appliances were held in the post-war era. His ideas were not only pioneering for Gaggenau, but for the entire sector. He paved the way for the evolutionary fitted kitchen, constructed the first built-in eye level oven in 1956 and launched the first separate cooktop and ventilation appliances on the market. With his passion for cooking, he knew to use his company to challenge the engineers to take account of the needs of professional chefs.

The entire plant was relocated to the area of the former Gaggenau glassworks in 1962. Kitchen ventilation appliances were produced for the first time. A development that led in 1976, for example, to the introduction of the first downdraft ventilation, which extracted vapors downwards directly at the cooktop.

The company began to expand internationally with the establishment of overseas subsidiaries in a bid to overcome the growing competition in Germany.[8]

Despite the expansion, it remained difficult for Gaggenau to compete internationally. Gaggenau was taken over by Bosch-Siemens Hausgeräte GmbH at the end of 1994/beginning of 1995.[9] Production and development were moved in their entirety to Lipsheim in Alsace and the company was restructured.[10] The Gaggenau brand is regarded today as an innovation leader for technology and design "Made in Germany". – "The Difference is Gaggenau".