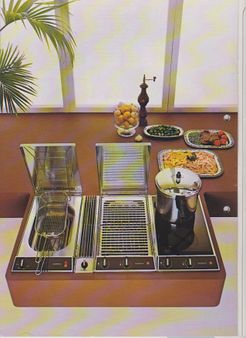 Gaggenau kitchen specialists launched the first Vario cooktop series on the market in 1976. The choice of seven different appliances, all of which could be combined as desired in one countertop, allowed a custom cooktop to be created to suit individual preferences. The range included an electric double cooktop, gas double cooktop, electric grill plate, shelf, electric grill, deep fryer and downdraft ventilation. 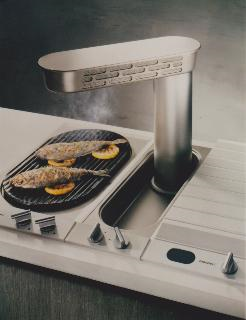 The most unusual element of the appliance series was without doubt the innovative Gaggenau VL011-107 downdraft ventilation. Cooking vapors could be extracted downwards thanks to the then completely new ventilation system with a motor unit in the base cabinet. The upper cabinet was thus left free, for example, for tableware or supplies. At just about 7 mm in width, the noiseless extractor fan unit was able to remove grease, dust and odors directly at the cooktop. A special metal grease filter was used to clean the fatty substances from the vapor before releasing it into the atmosphere. The removable filter could be cleaned effortlessly in the sink or dishwasher. In cases where large amounts of vapor or smoke were produced, for example, with the Vario VR 022-112 electric grill or the Vario VF 012-110 electric deep fryer or a combination of several appliances, several downdraft ventilation elements could be combined between the cooktops to improve the ventilation.

The innovative product did not become widely adopted initially however. Over the years, the series was continuously redeveloped and grew in importance as the popularity of open kitchens continued to increase. The downdraft ventilation was eventually modernized in 2014 with the launch of the remodeled Vario 400 cooktop series.[1]