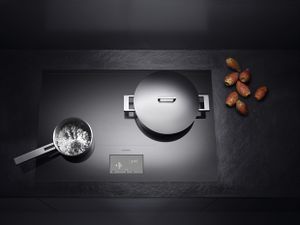 From rags to dishes

His culinary career began at the age of 14 when – as a dishwasher in a Michelin star restaurant – he was handed an apron by one of the chefs and sent off to chop herbs. "That was the moment I discovered my destiny," says Ryan Clift some 20 years on and now a multi-award-winning master chef and brand ambassador for Gaggenau since 2010. He cooks up his creative concepts in his "Tippling Club" restaurant in Singapore, which he opened in 2008. One of the top 20 restaurants in Asia, the kitchen has been fully equipped with Gaggenau appliances for a number of years now. A vital ingredient of this success was the CX 480 full surface induction cooktop with TFT touch display, which was launched on the market in 2011 – "the best induction cooktop I have ever worked with."

This new cooktop concept provided, for the first time, the entire surface as a cooking zone. The new CX 480 full surface induction cooktop boasted 48 micro-inductors beneath its ceramic glass surface, which were arranged directly in a row and offset laterally from one another. In contrast to traditional large induction coils, this structure transformed the entire cooktop to a single large cooking zone. The cookware was detected automatically and heated at its current position. Full flexibility was therefore assured since the cookware could be moved about and positioned as required. If a pot was removed from one cooking zone and positioned elsewhere on the cooktop, it brought its previous settings with it. Up to four pots and pans could be used at the same time on the 80 x 35 cm cooktop with a maximum power output of up to 4.4 kilowatts. The booster function temporarily increased the power of any of the cooking zones by about 50 percent, making it ideal for searing and rapid heating of large volumes of liquid. Intuitive operation was enabled via the TFT touch display, which also reproduced the respective positions, sizes and shapes of the cookware. A simple touch of the finger was all that was needed to select the cooking zone and set or change the power levels: move up slightly to increase the power level and down slightly to decrease the power level. The timer function could also be activated just as intuitively, while additional information could be queried using an Info button.

The Teppan Yaki - the plate over the fire

The CX 480 full surface induction cooktop came with special accessories, such as the Teppan Yaki, a steel hotplate placed over the entire cooktop for cooking traditional Japanese teppanyaki-inspired dishes. Teppanyaki roughly means a plate placed over the fire on which dishes are prepared for guests before their eyes at a counter or table.[1]