History of the Constructa brand 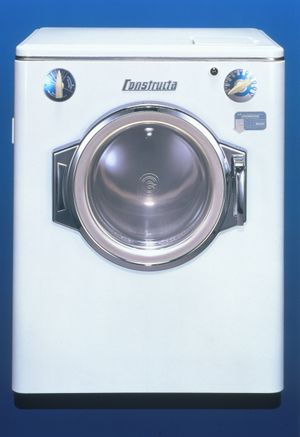 Washing laundry was still the most time-consuming and strenuous household chore up to the middle of the 20th century. Everyone helped out on washing days: soaking, boiling, beating and rubbing, bleaching, wringing and hanging out took hours. The development of the fully automatic washing machine was therefore a real revolution in terms of housework. In Germany, this revolution bore the name Constructa.

The situation was quiet in terms of developments on the washing machine market in Germany until the post-war era. If machines were used at all for washing, they were usually still semi-automatic wringer washers. Development was slightly more advanced at this time in the U.S.[1], with Bendix Home Appliances developing the world's first automatic washing machine there in 1937. There was a round glass door on the front for loading the appliance[2] – the porthole as it was known and which later became the trademark of Constructa.[3] The Bendix washing machine already had practically all of the features of a modern washing machine, through there was no built-in option to heat the water, which is why a hot water connection was needed.[4]

The first model of a comparable washing machine was developed in Germany by Peter Pfenningsberg from the town of Mettmann. He produced the first German washing machines in small numbers in his home town from around the end of the 1940s.[5] The Düsseldorf-based entrepreneur Heinrich Reining recognized the potential and invested in the idea. The company Peter Pfenningsberg Maschinenbau GmbH[6] was founded in 1951 in Düsseldorf. Pfenningsberg soon succeeded in developing his washing machine so that it no longer required a hot water connection. Apart from the "Pfenningsberg Universal" washing machine for commercial use, Pfenningsberg also presented an unnamed "fully automatic washing machine for the modern home" at the Constructa trade fair in Hanover. At a price of 2,280 deutschmarks, the machine was prohibitively expensive for the average household (the average monthly income at the time was around 500 deutschmarks) and had to be screwed down to a concrete base with four strong screws so that it didn't "walk" around the room when spinning. The machine got its name from the trade fair in Hanover and was exhibited under the name "Pfenningsberg's CONSTRUCTA" at the spring fair in Cologne in 1952.[7]

While the washing machines developed by Pfenningsberg were innovative, production still resembled a small factory. Ten appliances per day were being assembled some three years following the market launch. Reining therefore provided Pfennigsberg with a commercial advisor in the persona of Ernst Böcker. Annoyed by this, Pfenningsberg left the company. Washing machine production was modernized by Ernst Böcker. A larger production hall with simple assembly line production was established. The challenge now lay in stimulating demand for such a new and unknown product.[8] The product was therefore actively advertised at exhibitions and washing machine demonstrations throughout the Federal Republic of Germany.[9] And with great success – some 4,000 appliances per month were soon being sold. With a market share of 80 percent, Constructa was the undisputed leader in Germany on the washing machine market.[10] The Düsseldorf plant had already become too small by 1958 and production moved to Lintorf on the outskirts of Ratingen.[11] The company was called Constructa Werke GmbH from 1961. Constructa decisively shaped Lintorf over the next decade with some 30 to 40 percent of its employees living in the locality.[12]

From Siemens to BSH

Production continued to increase. Technical innovations, such as the flow method and the automatic water heating, convinced customers. Competition in the sector was still very tough however. Reining therefore entered negotiations with Siemens Electrogeräte AG, which produced washing machines at that time but not fully automatic washing machines. Siemens acquired Constructa on June 30, 1961.[13] At the time of the takeover, Constructa had a workforce of 3,500 employees and boasted monthly production figures of 20,000 automatic washing and drying machines.

The premises in Lintdorf were extended in the 1960s with the addition of new buildings. Despite this, Siemens decided to move production to Berlin. Constructa together with Siemens Electrogeräte AG became part of BSH[14] in 1967.[15]

The age of the economic miracle was now past. Competition became more intense with particularly strong competition from cheap goods from Italy. Despite this Constructa survived – as an established brand backed by a strong parent company. Constructa washing machines continued to be developed by the engineers at BSH. The appliances offered solutions for life in a modern city: for example, the 45 cm wide top-loading washing machine could fit in any small apartment and the multi-economy system helped to save energy and water. By the end of the 1980s, Constructa was really setting standards in terms of eco-design. Constructa extended the range over the decades, adding on dishwashers, refrigerators and freezers as well as built-in appliance solutions for kitchens. Even today, Constructa appliances are produced primarily in Germany and stand for reliable quality.