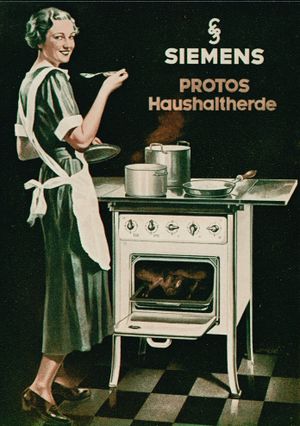 The "Telegraphen-Bauanstalt von Siemens & Halske" company was founded in Berlin on October 1, 1847.[1] Progressive development of the pointer telegraph by the two company founders Werner Siemens and Johann Georg Halske was pivotal in its establishment. The new pointer telegraph allowed letters to be transmitted, whereas the telegraph constructed ten years previously by Samuel Morse only supported Morse code. For the first time therefore it was also possible for untrained persons to operate a telegraph. This development was to revolutionize the world of telecommunications technology. During the turbulent 1840s – the decade was characterized by social unrest and revolutions throughout Europe – the possibility to communicate over long distances with practically no time delay was crucially important for the military and politics.

The fledgling company was commissioned in 1848 to construct a telegraph line between Berlin and Frankfurt while the German revolution was still in full swing. More than 500 kilometers in length, this was the longest connection in Europe. A large percentage of the lines were to be laid underground to protect against attacks. Werner Siemens used the rubber material gutta-percha to develop seamless insulation for this purpose.[2]

Large-scale orders from abroad ensured further expansion of the business in the 1850s. Siemens & Halske began work on constructing the Russian telegraph network in 1853 and the English network in 1858. Werner Siemens and his brothers who were working abroad for the company won numerous accolades for their accomplishments. The English Queen Victoria knighted Wilhelm Siemens in 1883, while Werner Siemens was elevated to the peerage by the German Emperor Frederick III in 1888 and the Russian Tsar, Nikolaus II, knighted Carl Siemens in 1895.[3]

Dawning of the era of electrical engineering

As the popularity of electricity spread, there was increasing competition from other companies at the end of the 19th century. The "Deutsche Edison-Gesellschaft für angewandte Elektricität", which was founded in Berlin in 1883 and later became known as AEG, continued to pose serious competition until the mid-1990s. The competitor "Elektrizitäts-AG", formerly "Schuckert & Co.", on the other hand was already taken over by Siemens in 1903 and merged with its own heavy-current division to form "Siemens-Schuckert-Werke GmbH".[5]

Siemens & Halske expanded its product portfolio to cover the entire field of electrical engineering through other specialist subsidiaries and associated companies. For example, Siemens & Halske was also active in the area of automobile manufacturing for a brief period between 1908 and 1926. Regarded as very progressive even by today's standards, the company was already building electric vehicles at this time that were as advanced technically as the combustion engine vehicles it also manufactured.[6]

The international network of subsidiaries and associated companies was broken up with the outbreak of World War I. Property, material assets as well as patents and property rights abroad were confiscated. The international business had to be rebuilt again when the war ended. Former subsidiaries, such as the English Siemens Brothers & Co., were now competitors. As before the war, Siemens succeeded in keeping the business going with the aid of large orders. The largest of these projects was the electrification of the entire Irish Free State, which was completed in 1930. Siemens had re-established 193 overseas branch offices before the outbreak of World War II in 1939. 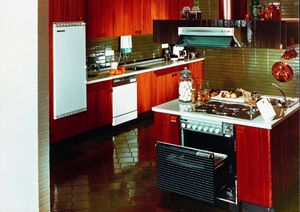 Siemens benefited in National Socialist Germany from the flow of orders stimulated by preparations for war. With revenue of 1.3 billion Reichsmark, the company group became the most successful German electrical company. The labor shortage that ensued during the war years was increasingly compensated for by forced labor in the 1940s, with the result that some 50,000 of Siemens' entire 244,000 strong workforce were working as forced laborers in 1944.[7] In 1942, the "Siemenslager Ravensbrück" camp was established in the immediate vicinity of the Ravensbrück concentration camp, where detainees manufactured telephone sets, radios and measuring instruments for Siemens. Siemens products deemed important for the war effort were produced additionally in the concentration camps at Auschwitz and Lublin.

The Siemens factory buildings and plants were devastated by the bombardment of industrial installations by the Allies in 1945.

It wasn't until 1950/1951 that Siemens succeeded after five years in restoring revenue again to pre-war levels. The international side of the business was also successfully restored by 1959. The Siemens Group had split into three independent companies by 1966: Siemens & Halske AG, Siemens-Schuckertwerke AG and Siemens-Reiniger AG. The three joint-stock companies were reorganized in a bid to respond to changes in the competitive environment and on the international markets and merged to form the umbrella organization Siemens AG. The comprehensive network of associations and subsidiaries, such as Siemens-Electrogeräte AG founded in 1957, remained in existence.

With the global triumph of the electronics industry, Siemens also succeeded in achieving rapid economic growth.

Electrical home appliances remained luxury goods for a long time due largely to a patchy public power supply. A mere fifty percent of households were connected to the power network in the metropolis of Berlin in 1927. Yet Siemens had been manufacturing electrical home appliances since the turn of the century. The history of Siemens Hausgeräte began in 1906 with the dust suction pump, the world's first vacuum cleaner.[8] Siemens was producing home appliances, such as coffee grinders, hairdryers, drying hoods, irons, refrigerators, washing machines and electric cookers, under the brand name "Protos" from 1925.[9] The "Gesellschaft für drahtlose Telegraphie mbH", or "Telefunken" as it was known, was founded as a joint venture between Siemens and AEG and produced radio receivers and the first television sets in the 1930s.[10]

When production was restored in the 1950s, the portfolio included the entire range of small appliances, white and brown goods, as the home appliances (white) and entertainment equipment (brown) were known to reflect their typical colors. The business grew rapidly. Siemens produced home appliances at the Berlin and Traunreut locations and then also in Ratingen-Lintorf from 1961 with the acquisition of washing machine manufacturer Constructa. The first signs of saturation on the home appliance market were starting to appear by the mid-1960s. Siemens Electrogeräte founded Bosch-Siemens Hausgeräte GmbH together with the home appliances group of Robert Bosch GmbH in 1967. The two companies consolidated their production and thus succeeded in remaining competitive in an increasingly tough market. BSH[11] has continued operating successfully to this day. Siemens pulled out of direct customer business in the new millennium. The share in BSH was sold to Robert Bosch GmbH in 2015 as the final consumer segment.

Siemens AG up to the present day

As the upturn in the home appliances sector ground to a halt in the 1970s, the era of microelectronics and the computer dawned at the same time. Basic research had been ongoing in these areas since the 1950s. Siemens successfully entered the microelectronics market in 1953 with a patent for producing extremely pure silicon, the basic component of microchips.

Thanks to successes achieved in miniaturization, the first microprocessors and memory chips appeared on the market in the 1970s. Memory and processor capacity developed rapidly. The performance of the processors and chips doubled approximately every four years.[12]

Siemens was active at this time in the telecommunications, microelectronics, computer technology, energy generation, medical engineering and transportation engineering sectors.

The company group was constantly remodeling in the 1990s and early 2000s. The semiconductor division was spun off as Infineon Technologies AG in 1999, for example, while the Siemens Mobile mobile phone arm was sold to the Taiwanese company BenQ in 2005. Siemens concentrated increasingly on the industrial sector. As the final consumer product segments, the majority of shares in Osram were sold in 2013 and the complete shareholding in BSH Hausgeräte in 2015.