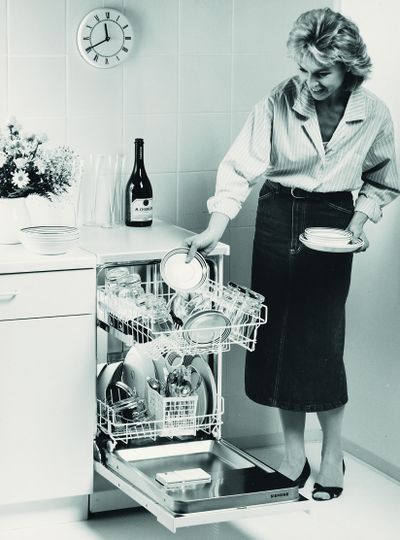 BSH[1] presented a world-class innovation at Domotechnica in 1987 – a dishwasher that measured just 45 cm in width.

Siemens distributed the new 45'er – as it was known internally – under the name LADY PLUS 45. Apart from the revolutionary new width, the dishwasher was fitted with the newly developed AquaStop, which offered full protection against water damage. The eco-plus system, as it was referred to, had a two-part dispensing chamber to allow the detergent to be dispensed in accordance with the degree of dirt of the dishes. This meant that it was also gentle on the environment. The pre-flush system in the dispensing chamber was another new feature, with the detergent being pre-flushed during the pre-rinse stage so that it was already dissolved when added to the main wash cycle.

The program was selected electronically, though not yet fully automatically at that stage in the 1980s, as is the case today: The type of dishes, the load size and the degree of dirt had to be entered, with the dishwasher then selecting the correct program. The timer function allowed the machine to be set to start later, for example, to take advantage of a cheaper night-time electricity rate. The fast program needed just 29 minutes to clean smaller quantities of slightly soiled dishes for immediate reuse, thus reducing both water and detergent consumption by one third.

The LADY PLUS 45 shared the features described with its larger 60 cm wide sibling.[2] However, the slender dishwasher was more expensive to produce initially than the standard-width dishwashers. The 45'er therefore boasted many innovations. It was especially energy-efficient in term of its washing ability[3]: A heat exchanger and instantaneous water heater were integrated in the LADY PLUS 45 for this purpose. The heat exchanger allowed some of the heat energy in the hot water from the current cycle to be used to heat the water for the next cycle. The instantaneous water heater replaced the heating element in the interior floor.[4] It heated the water selectively and thus reduced the volume used, resulting in further energy savings. And because the lower part of the dishwasher did not get as hot, plastic could also be placed here. The 45'er dishwasher also had a taller interior than its wider sibling, so that 31 cm plates could be placed in the lower section without having to adjust the height of the top basket. The LADY PLUS 45 also had an automatic function that switched off the appliance at the end of the program.[5]