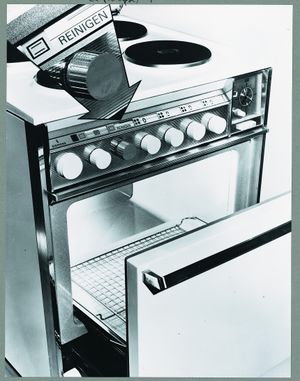 "The LED panel is a recognized feature of Siemens cookers. It provides housewives with a modern "command center" as it were, on which all switch symbols and switch positions can be clearly and concisely identified at a glance thanks to the widely dispersed, bright lighting."[1]

This was just one of the sales arguments used to promote the new Siemens "Meisterkoch" (Master Chef) cookers launched in 1970. Apart from the illuminated switch indicator, the series also offered additional innovations. The flagship was the "Siemens MEISTERKOCH 7412", an expansive automatic cooker with extra-large oven (57 liters) that also featured a number of extras: The cooker had an extractable slide-in oven (with full glass front) that provided access to the food from all sides without the chef having to reach into the oven's hot interior. Two of the four hotplates on the "Meisterkoch" were automatic plates that could be adjusted between "warming, cooking and roasting" zones. They regulated the temperature automatically, finally putting an end to spills and burns The automatic roasting function integrated in the oven simplified preparation of meat dishes: The weight and type of meat simply had to be specified and the oven then automatically set the proper pre-cooking (at 250 degrees) and post-cooking (at 80 degrees) time. An intense grilling function with electronic rotisserie spit rounded off the oven. There was a storage compartment for accessories beneath the cooker that could also be used for keeping finished meals warm.