The first Bosch refrigerator – a round affair 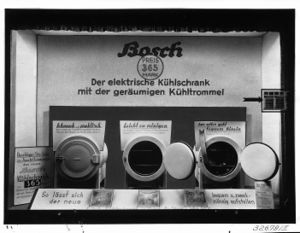 A drum-shaped refrigerator? Bosch presented this unusual household assistant at the Leipzig spring fair in 1933. The first Bosch refrigerator with its round cooling container was quite different in appearance to the competition's cabinet models.

The round design offered many advantages however. Thanks to the cylindrical shape, the cooling tubes could be positioned around the food to be chilled, allowing even distribution of cooling from all sides. The round shape also meant that the surface was some ten percent smaller in comparison with angular refrigerators. Less cold was therefore radiated and the appliance was consequently more energy efficient. Last but not least, the eye-catching exterior ensured a high level of awareness for Bosch's newcomer. The refrigerator was the entry point for Bosch on the home appliance market. It allowed Bosch to extend its product portfolio and achieve a certain independence from automotive technology.

Bosch wanted to offer an affordable appliance for the average person, which is why the interior space was limited to 60 liters. Although the appliance was attractively priced compared to its competitors – it cost just 350 Reichsmark – it was still too expensive for many households, with the average earnings only around 200 Reichsmark a month.

With opinion divided both in terms of esthetics and convenience, the product planners stepped in. The successor appliances in 1935 and 1936 had the typical cabinet format and a larger usable volume of 90 and 120 liters.[1]