Robert Bosch GmbH established Bosch-Siemens-Hausgeräte GmbH[1] in 1967 together with Siemens AG. But the history of the company Bosch dates back further than that to 1886 when Robert Bosch opened his "Workshop for Precision Mechanics and Electrical Engineering" in Stuttgart. Now a global concern, this is where the company started out as a small production, maintenance and repair business. 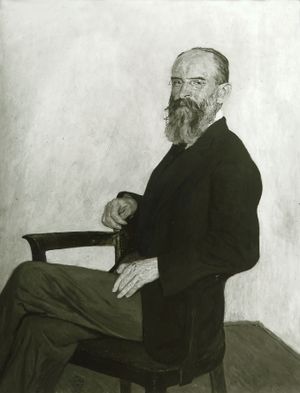 "Workshop for Precision Mechanics and Electrical Engineering" in Stuttgart

Following his apprenticeship training as a precision mechanic, the aspiring entrepreneur Robert Bosch worked for Schuckert & Co[2] in Nuremberg among other companies during the 1880s. Having spent a semester at the Technical University in Stuttgart studying electrical engineering and then working in the U.S., Bosch also worked for Siemens Brothers in England. The paths of the future partner companies had therefore already crossed well before BSH was established. Robert Bosch opened his "Workshop for Precision Mechanics and Electrical Engineering" in Stuttgart on November 15, 1886. In the early years, he was still carrying out all precision mechanics and electrical engineering work himself. On October 8, 1887, the workshop for the first time supplied the product for which Bosch would soon become famous: the Bosch magneto ignition device for combustion engines, initially at the time for stationary engines. By 1891, the manufacture of the magneto ignition device was already accounting for more than 50 percent of revenue. Despite this, business was often sluggish in the first ten years. Robert Bosch himself later described this time as a "shambles". The situation had improved by 1895 with the construction of the power plant in Stuttgart. Homes and businesses in Stuttgart were now increasingly supplied with electricity, with the result that the demand for electrical engineering grew rapidly. The 1000th magneto ignition device for stationary engines was produced in 1896 – to mark the day, Robert Bosch invited his employees to a company outing in a nearby hostelry. The following year, the company succeeded in making a technical breakthrough with the construction of magneto ignition devices for automobile engines. The first office outside Germany was opened in England in 1898, followed a year later by branches in France and Austria-Hungary. The greatest success achieved abroad by the Robert Bosch company however was in the U.S. Orders worth over a million dollars were landed on the first U.S. foray. By 1912 at the latest, the U.S. had become the most important sales market for the company with the opening of a local facility in Springfield. When the First World War broke out two years later, the German company lost its entire foreign market. The Bosch properties in the countries of the Triple Entente, material values as well as patents and property rights were confiscated. Production in Germany was switched to armaments. Robert Bosch AG was founded in 1917 while the war was still raging.[3] 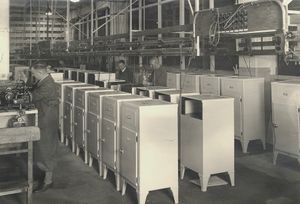 From automotive supplier to electronics corporation

The reconstruction following the war years progressed successfully. Most of the foreign subsidiaries were rebuilt and some new ones added. The product range was expanded to include a host of new innovations, including a diesel injection pump in addition to vehicle lighting, windshield wipers and power brakes. Further production branches were added by the mid-1930s, with production of home appliances commencing in 1933 with the first electric refrigerator. Robert Bosch AG transformed itself at this time from a pure automotive supplier to a broadly diversified electronics corporation. Robert Bosch turned the public limited company (AG) into a limited liability company (GmbH) in keeping with his "... desire that Robert Bosch GmbH (...) remains active for as many generations as possible, securing their financial independence, their autonomy and capacity to act at all times." During the years of National Socialism in Germany, the company acted in the same way as other German family businesses guided by politically liberal-minded and European thinking individuals. Employees suffering persecution and others known to management received support and were, where possible, protected against deportation. At the same time, however, because the company was an important manufacturer of armaments, goods vital to the war effort were produced by the company, sometimes with the use of forced labor, which allowed National Socialist Germany to wage wars of aggression. Robert Bosch did not survive the end of the war. He died from an ear infection in 1942.[4] 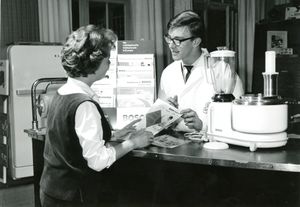 The situation at the end of the Second World War was similar to the 1920s in terms of the rebuilding effort. An international sales network and global manufacturing network were gradually established again. Apart from automotive technology, Robert Bosch GmbH focused on three other business sectors at this time: power tools, white goods, in other words electrical appliances, and brown goods, including products from the field of radio and television technology. The company grew rapidly and the workforce quadrupled in the intervening years between the 1950s and 1960s. Individual business units were transformed into independent business divisions in the course of modernizing the company structure. For example, the home appliance business was converted into an autonomous Bosch home appliance group in 1965 as part of the restructuring. This company then went on to establish the joint venture Bosch-Siemens Hausgeräte GmbH (BSHG) together with the home appliance arm of Siemens AG in 1967. The Bosch brand had already established itself on the home appliance market with products such as the domestic refrigerator (1933), the Bosch food processor (1952) or the world's first built-in cooker (1962).[5] 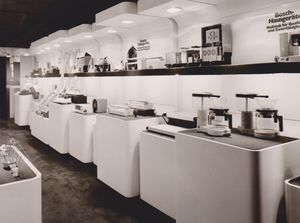 The parent company continued to develop into a global concern in the years that followed. The expansion into Asian markets that had been taking place since the 1970s and 1980s was followed by the development of the Eastern European markets in the 1990s with the opening of the Iron Curtain. The telecommunications product division grew in importance, while the digital age in the new millennium heralded the use of connected technology. The 21st century has already posed new challenges in the form of the global economic crisis and climate change.[6]