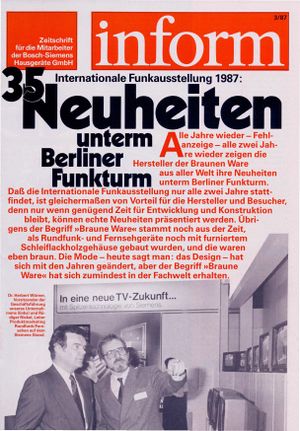 "Here is the VOX-Haus in Berlin at the wavelength 400 meters!" That's how the first transmission of the Germany's first entertainment channel began on October 29, 1923.[1] Just three months later the number of listeners had increased to 500 and then to one million a few years after that![2]

In the beginning was the radio

The radio began its triumphant march as an entertainment medium in Germany with the first German entertainment channel. Siemens & Halske presented their first radio receiver at Germany's first major radio exhibition in Berlin in 1924 – a three-stage tube set and horn loudspeaker called the Siemens-D-Zug.[3] The name was based on a symbol of progress in Germany, the express train. The “D-Züge” or "Durchgangs-Züge" as they were called in German were high-speed trains that allowed train journeys in Germany to be shortened significantly. In the years that followed, Siemens launched numerous radio receivers and chamber music consoles as they were known on the market – the latter a combination of radio and electric record player.[4]

When BSH[5] was founded in 1967, only Siemens entertainment electronics featured in the company’s portfolio. Brown goods – the term came from an era when radio and television sets were still built with veneered, brown sanded varnish wooden cabinets[6] – were an important mainstay for BSH in the early days. The first color television was already launched in 1967 with the support of Siemens – a joint development by Telefunken, Blaupunkt (Bosch), Mende and the Siemens development lab.[7] Siemens entertainment electronics were very successful on the market in the 1970s. The range included the "Bildmeister FC 624" television set and the "microcompact" HiFi component.[8] Despite high growth rates[9], the sector only went into the black, however, in 1987.[10]

At the International Consumer Electronics Fair in Berlin in 1987, Siemens proudly exhibited its full range of entertainment electronics, including 35 new innovations.[11] This included color TVs, video recorders, radio recorders, clock radios or radio alarm clocks, HiFi equipment and shortwave receivers. The FS 940 color TV boasted flicker-free picture clarity and allowed a still image for the first time. The FM 574 video recorder enabled picture-in-picture technology with the current TV picture being displayed on the screen when the image was viewed from the video recorder. The FA 108 camcorder with 8-mm video system was especially lightweight at just 1.3 kilograms and had a high-resolution CCD image sensor, 6x motorized zoom lens and digital autofocus. The RW 736 CD player could play up to 32 preselected titles from six CDs. With seven wavebands and 24 world times, the RK 702 shortwave receiver weighed just 320 grams.

The 1990s – continued success, then withdrawal