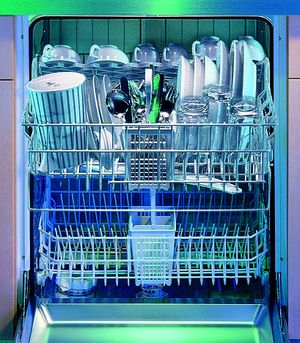 It goes without saying when washing by hand: The water is only changed once it gets too dirty. BSH[1] launched a dishwasher on the market in 1996 whose electronics thought along these lines. The appearance of the new GV630 range of dishwashers attracted lots of attention among competitors and testing institutes.[2]

It was already clear at the beginning of the 1990s that BSH's old central dishwasher series, the GV60 series, had reached the end of its product life. Significant progress in the areas of consumption, dishwasher performance, quality and above all cost reductions could no longer be expected with the old series.[3]

A new series was needed. The board of management decided that the top-class dishwashers in this series should get an electronic controller, as already manufactured by Bosch and Siemens. The obsolete appliances still used a roller controller. Integrating a new electronic circuit board with the old roller controller did not offer any advantages however. The alternative was to use sensors to feed the signals to the electronic circuit board. The only problem was that they had not been developed as yet.[4]

This posed a tantalizing challenge for the present day head of the Dishwasher Care production division Michael Rosenbauer, who was an engineer at the time in Dillingen. He recognized the potential that lay in developing these sensors. His efforts resulted in the development of a turbidity sensor that detected the degree of dirt of the water. The development was called AquaSensor – based on the successful water damage protection solution AquaStop.[5]

The AquaSensor was integrated in the new GV630 dishwasher series and controlled the reusage or draining of the pre-rinse water by checking the cloudiness of the water. The AquaSensor thus helped save around 20 percent of the washing water.[6]

Operation of the AquaSensor

An infrared LED and phototransistor were arranged opposite each other on a U-shaped board and protected by housing made from translucent plastic. This sensor was integrated in the instantaneous water heater. The infrared diode then sent its light through the flowing water to the light-sensitive base of the phototransistor, which became conductive when irradiated by light. When the water became cloudy, the light could no longer reach the diode to activate the phototransistor. The absent voltage signal was detected by the microcomputer on the electronic circuit board and this then initiated the required replacement of the water.[7]

A preset time and regeneration electronics were also integrated in the controller. The latter only initiated regeneration of the water softening unit with salt when this was deemed necessary based on the set water hardness level and the dishwasher programs used. This avoided unnecessary consumption of salt and regeneration water.[8]

At the end of June 2000, the dishwasher development team from Dillingen was awarded the Bavarian Innovation Prize for the new fully automatic dishwasher by Prime Minister Dr. Edmund Stoiber. The laudatory speech was made by physicist and former astronaut Dr. Ulf Merbold who praised the appliance in which the AquaSensor played a central role with the following words: "This dishwasher being awarded here today is the only one in the world that selects the best dishwasher program in each case without any intervention by the user. The degree of dirt of the water indicates both which dishwasher program cleans the dishes effectively and offers the most economical water and energy values. It therefore not only lightens the impact on the user's purse but also the environment."[9]