The relatively short period between 1979 and 1983 was a phase of national growth for BSHG[1]. The consolidation of BSHG in the 1970s bore fruit and the company managed to effectively maintain a foothold in the market despite the economic crisis and even expand its own position.

Drop in revenue at BSHG – "The kitchen is full"

An article appeared in the German magazine "Der Spiegel" in 1982, entitled: "Die Küche ist voll. Die Hausgeräte-Hersteller stecken in einer schweren Flaute," which roughly translates as "The kitchen is full. Home appliance manufacturers experiencing serious downturn."[2] The negative effects of the second oil crisis from 1979/1980 were being clearly felt at the start of the 1980s.[3] 1982 in particular was a very difficult year for the German economy: High unemployment, rising energy prices and a decline in real income also impacted the home appliance industry.[4] High interest rates and the slow pace of housing construction were the final straw, the home appliance boom of the early years was definitely over.[5] Refrigerators, washing machines and vacuum cleaners were already standard appliances in more than 90 percent of all Federal German households in 1982, leaving only the meager business with replacement units. Added to this, excess capacities existed in production: according to estimates, 15 to 20 percent more food processors were manufactured than sold in Europe at the beginning of the 1980s. 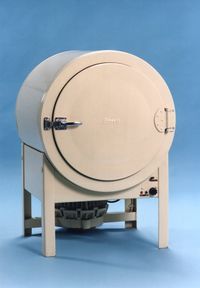 BSHG managed to maintain its position despite the difficult times; and held a market share of 16 percent in Germany in 1982. This put the company in second place behind AEG.[6] The streamlining of production in the 1970s proved worthwhile. Unlike the competition, BSHG concentrated its production in four factories. Each of these sites meanwhile specialized in specific product groups. Revenue increases of between 3 and 11 percent were recorded annually between 1979 and 1983.[7] BSHG launched its internal HR and social report in 1979, providing information on measures such as advanced education and training or occupational and health safety.[8]

The BSHG brand products were presented at the time under the motto "Future-proof appliances that are a pleasure to use".[9] 1983 was also a year when BSHG celebrated an impressive anniversary: 50 years of electrical refrigerators from Bosch essentially equated to 50 years of experience and progressive development of the appliances. The BSHG washing machines were also becoming increasingly modern and efficient. Siemens launched the first fully automatic washing machine on the market with the SIWAMAT 870 Electronic. 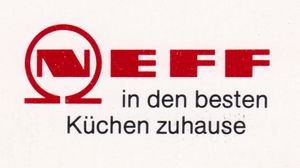 Competitor and market leader AEG went spectacularly bankrupt around the middle of 1982. The then Board of Management of AEG set about trying to restructure the company by selling off the lucrative parts.[10] This allowed BSHG to expand its portfolio with the addition of the familiar NEFF brand. Neff Werke GmbH, a subsidiary of AEG, had the reputation of being a manufacturer of high-quality home appliances.[11] On November 15, 1982, BSHG acquired the NEFF trademark as well as a portion of the fixed and current assets including the sales subsidiaries in England, France and Austria and founded what is today NEFF GmbH in Munich. Around 1,000 jobs were successfully retained at the Neff site in Bretten.[12] New sales channels opened up for BSHG, with Great Britain being one of the most significant. NEFF also brought with it specialized technical knowledge and innovations in product development.[13]